When a human gets an upset stomach, it is usually not a serious event. We can typically just take an antacid and go about our business. However, this is not at all the case for alpacas because an "off" stomach for a ruminant can quickly cause an agonizing, hemorrhaging death. The best “natural medicine” for an alpaca with tummy troubles (ulcers aside...they require special medicine) is a tasty drink that in medical terms is called a transfaunation, or a rumen juice transfer. Think of it as a smoothie with alpaca cooties. It’s not available in stores, but if you have a spare alpaca just kushing around, you’ve got a ready-made source just waiting to be tapped.

Seriously…relocating, weaning, showing, transporting, feed changes, traumatic births, injuries or illnesses can lead to serious digestive upset (especially problematic when it causes the alpaca to go off feed) in the stress-sensitive alpaca. The symptoms of tummy troubles in alpacas are as varied as the causes. The affected alpaca may act uncomfortable when kushed with its rear legs out to one side, hold its ears pinned back, have a tense face or show other signs of discomfort. It may also display a lack of appetite, bad (rancid) breath, a reduction in activity and a reluctance to socialize.

Alpacas are ruminants so their feed undergoes microbial predigestion in their forestomachs. If the normal ruminal function is impaired for any reason, then serious illness, and possibly death, can result. For example, policoencephalomalacia causes brain damage and develops due to a reduction in thiamine, a B vitamin produced by normal digestive processes. Ketosis and hepatic lipidosis (fatty liver disease) can result from an alpaca not eating properly. Various forms of gastric ulcers are relatively common and are also associated with stress. So, the next time you need to treat an alpaca with tummy troubles, you should ask your veterinarian about a Rumen Juice Cocktail chaser…a transfaunation in technical terms.

Transfaunation is the administration of fresh rumen juice from the stomach of a healthy donor animal. Rumen juice contains hundreds of bacteria, protozoa and volatile fatty acids necessary for proper digestion. (Manufactured probiotics contain only a few of the many bacteria needed and therefore offer only limited help.) Rumen juice can be extracted from any healthy alpaca. It is best for the donor to be on the same feed as the recipient for better adaptation of the necessary rumen constituents. It is also possible to have a donor, such as a healthy gelding, surgically fitted with a gastric fistula to allow easy access to stomach contents. Such a donor would earn the new nickname, "Kegger”. I used transfaunation for the first time recently to treat two sick alpacas. Here are my two stories and all kidding aside for now.

“Studley” traveled several days across country and apparently did not eat much along the way. He arrived at my farm early in the morning acting normal, but with no appetite whatsoever. We housed him in our backyard, which is adjacent to the pastures, for close observation and called our veterinary clinic. Our veterinarian came out the same day and told me that Studly was also dehydrated. Studly was given the same type and brand of food (although from different sources) he had at his previous home and only nibbled half-heartedly. After a couple days of oral doses with electrolytes, probiotics and Gastrogaurd he drank some water, but still was not very interested in eating. “Rancid breath” was discovered by a very strong, acetone-like odor emanating from my well-washed hands after administering oral medications. Studly did finally eat a little chopped alfalfa that I borrowed from my neighbor who has horses. He was taken to visit the females as an attempt to cheer him up and while he acted interested in them, he was not interested in breeding at all. Bloodwork indicated that he had not been eating well and a mild case of fatty liver disease but was otherwise normal. Each day for a week he was visited by one of our two veterinarians. The treatment regimen included electrolytes, probiotics, Gastroguard (for ulcer prevention), propylene glycol (for energy to treat ketosis), vitamin and mineral paste and a vitamin B injection.

While Studly’s attitude remained good, he showed little improvement over the course of these several days. During this time, a transfaunation (rumen juice transplant) was mentioned by a couple breeders and so I suggested it to my veterinarian. A transfaunation would reintroduce necessary digestive components into Studly’s gastrointestinal tract and should help him to regain his appetite. The veterinarian and I first attempted to acquire the rumen juice by tube feeding a (sedated) gelding what seemed like a couple buckets of water. Then we tried to recover some stomach contents, but to no avail. So off my vet went to find a freshly slaughtered cow (an anonymous donor), which he was able to do the same day. He came back with a bucket full of a stinky, watery, brown liquid that we tube fed into the patient’s stomach. Cheers! Three days later he was eating normally and he made a swift and full recovery.

Several months later, the second case occurred. A 3-month-old female cria, “Sweet Pea”, became overly stressed while being handled during her first experience with needles for DNA blood samples and vaccinations. She was observed two days later acting very uncomfortable while kushed with ears pinned back and a tense face…signs of abdominal pain. Sweet Pea also had the same very bad smelling acetone/rancid breath as Studley. Coincidentally, a few days earlier, I had read for the first time about “rancid breath” in Dr. Norm Evans’ new book for which the only effective treatment mentioned is a transfaunation.

After consulting with my veterinarian on her condition, I wired a quart-sized dairy container to a halter and ever so slowly put it on the cria’s dam and then brought in a male to behavior test her. Since her dam is not very spitty, I ended up using another bred female who contributed just enough for the job. The sputum, collected just before the veterinarian arrived to administer it with a stomach tube, was mixed with two cups of tepid water. The liquid can also be lightly strained and administered with an oral dose syringe. Bottom’s up! Sweet Pea was also given Gastroguard preventatively. The next day, her breath was normal and after a few days she was back to her usual self.

Constant, close observation is crucial for a successful herd husbandry program. Owners who keep this in the forefront of their minds will be able to recognize and care for their animals preventatively rather than having to react later to perhaps a more serious situation. Although alpacas are stoic, any responsible owner can easily recognize trouble brewing by certain abnormal behaviors. Thus, if an alpaca acts noticeably sick, it could be very sick and the owner should take immediate action without delay. While transfaunation may not be a panacea for all cases of tummy troubles, it produced swift improvement for my two recipients…and no hangovers! All the other treatments provided only minimal and slow improvement. However, those other treatments were absolutely necessary to cure and prevent other illnesses. As always, work closely with your veterinarian as soon as you notice that an alpaca is ill in any way and observe carefully for potential gastric ulcers, or treat preventatively for them (recommended). They say an ounce of prevention is worth a pound of cure. In the case of a sick alpaca, an ounce of spit could be priceless.

Laura Coussens owns and operates Kissin’ Coussens Alpacas in Stanwood, WA with the help of her much adored family. Just before alpacas entered her life, she became a stay at home mom and previously earned her Bachelor’s degree and worked 16 years in the retail and aerospace industries. 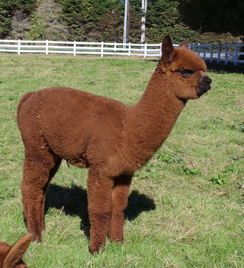 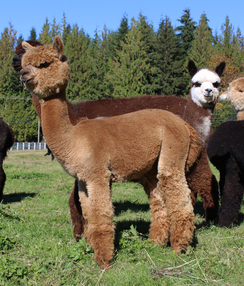 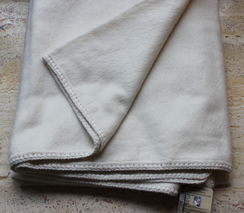 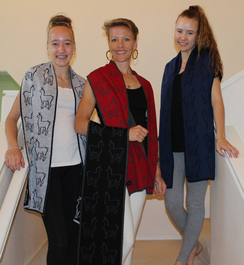